Is Your Life Boring? Why Don’t You Study Abroad?

Is Your Life Boring?

Why Don’t You Study Abroad?

By Lee Seo-jin  Reporter, Senior of Material Science and Engineering

The HBNU’s 2021 Global Short-Term Training course was held this winter. Since 2020, this program had been conducted online because of COVID-19, but this time, it was conducted both online and overseas. The overseas dispatch training agencies were scheduled to be at Wolverhampton University in the UK, the University of Nevada in the US, and the United Nation (UN) intergovernmental organization in Switzerland, but due to the spread of Omicron, the UN canceled their face to face programs. Therefore, the other two institutions conducted the training. The selected HBNU’s students received scholarships.

This article is the personal report of a journalist who went to Wolverhampton University in the UK for a month, from 27 January to 19 February. 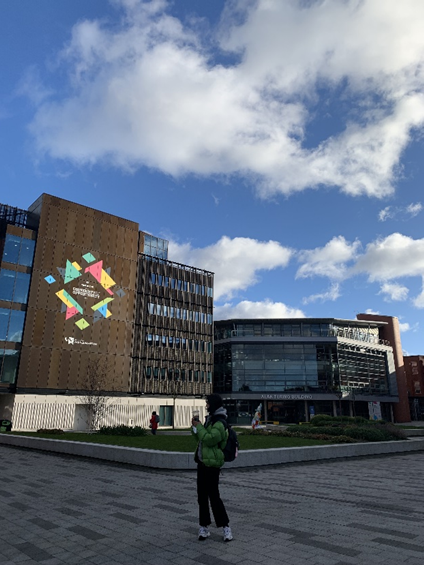 This program was run on a first-come, first-served basis. The documents that needed to be submitted included a certificate of enrollment and proof of language performance. In addition, vaccination was a prerequisite due to COVID-19. After the application and selections were made, pre-education was held for the students. Through this pre-education, students could prepare to use English and understand the culture of the country. A native English professor and a Korean professor of English Language and Literature gave lectures on how to write emails, how to do presentations, and on the culture of other countries.

In the UK, “With Covid” was being implemented in January 2022. At that time, many people did not put masks on their face, and even if they had COVID-19, they did not self-isolate. Entering the UK from other countries was not hard. There were no specific self-isolation areas. There was no problem, as long as overseas entrants passed the ‘day2’ kit that was ordered to their residence in the UK.

Regular classes during the training

In this program, twenty-six Korean students and Forty French students participated in language training at Wolverhampton University City Campus. As the number of students was large, we took a level test and classes were divided, according to the student’s English level. The Wolverhampton University’s program was divided into classes where the students took professor’s lectures and field trips, so students could travel together to many places in the UK. In the classes, we learned English from 10:00am-13:00pm, and in the afternoon, we could choose between Professional Communication classes and TOEIC classes. Under the guidance of several professors, we discussed and presented information about French, Korean, and British cultures. Once every two weeks, French and Korean students worked together to give mini presentations.

On Wednesday and Friday afternoons, we went on field trips to places including Chester, Birmingham and Cambridge. On these field trips, there was an advantage that could only be enjoyed in this program. Before the trip, some professors prepared us with information about each location in the class, to help us prepare. In addition, there was no transportation fee because we traveled together in the university’s bus.

Every evening, there was a program called “Social Night.” There were simple sports, quiz times, and movie times. This was a perfect time to enjoy British pub culture.  I could go to the pub and make foreign friends of various nationalities. Also, I could drink various alcoholic beverages, and dance with my friends.

Life during the training

The accommodation provided by Wolverhampton University in the UK was a dormitory. Wolverhampton University dormitories are home to students of various races and nationalities. They have several flats. There is a shared kitchen and dining room in each flat. Also, there are four to five personal rooms and private toilets. In the UK, having a meal in a restaurant is really expensive. It was much more economical to go grocery shopping and make food with flat-mates and share our food. (In addition, rumors that British food is terrible were true...)

In accommodation, there were many students from various nations, so we could experience various types of cultural life. The accommodation had various convenient facilities such as a laundry room, sports facilities, and communication rooms. There were two very impressive things I experienced while living in the dormitory: The first one was the experience of sharing food with Korean and French students. My French friends and I prepared each country’s dish and we ate together. We prepared some characteristic foods to give a strong impression for fun. I can not forget my friend’s smelly goat cheese. Its smell was so strong that my nose could smell nothing. I prepared Buldak Bokkeummyeon (Hot Chicken Flavor Ramen) that was really spicy for them. My friend ate it and spewed fire out of his mouth. It was a really fun experience for us. The second most memorable experience was in the laundry room. I had to use an app to use the laundry machines. There were already many broken washing machines, and it was my first time using them. Unfortunately, I had a problem with the washing machine not working, even after I had put the money in. It was the beginning of the month, so I did not have any friends to ask for help. At that time, an unknown foreign student helped me. I can not forget how grateful I was for the help I received when I was in trouble. During that one month, I was helped by many strangers. Therefore, I wanted to be helpful to other people.

Since the training period was about a month, on the weekends, I could travel anywhere I wanted to go in England. I have visited everywhere, including London, Brighton, Bath, etc. and the place that I recommended the most is Brighton. Brighton has the Seven Sisters; a combination of magnificent white cliffs, and a sea that is full of waves. There is a spectacular view that cannot be seen easily anywhere on Earth. It is on the southern coast of England, and it is extremely windy, so I recommend you to look up a lot of information for a safe trip. London is such a famous city that everyone knows, so you can go wherever you like. Still, I would recommend the Sky Garden and the National Gallery. Also, both places are free to enter! If you are a ‘Portermore’, I would also recommend going to the Harry Potter Studio, and if you love football, it will be a great experience to do a stadium tour and watch a football game.

+Tips about trains in UK

2.  If you are buying a rail-card, to get a discount, collect your friends who want to buy the same one and pay as soon as possible.

3.   From London, take the train early! If your train is going out of town from London at peak times like 7p.m. on Saturday, you should get rid of the idea of sitting down. Even if you reserved your seat. London is that kind of city…

The best thing that I experienced in this one month was that I could feel “freedom” in my heart. Leaving behind my worries in Korea, it was a truly valuable experience for me to be able to move as I wanted, and I felt that it was a very precious moment in my life. Even in the UK without a mask! Also, I was even more lucky because I met so many nice, kind people. Therefore, I really recommend this to HBNU’s students who are tired of their life as it is. In addition, I gained a lot of confidence in listening and speaking English. This one month gave me life’s vitality and made me look forward to my future life. Therefore, I would like to recommend it to everyone who reads this article. Do not hesitate to challenge!