With the development and utilization of communication technology more media is being created. Not only professionals, but also non-professionals can create, edit, and share videos with ease. Within all of this media output, vlogs have gained great popularity. Let’s examine what a vlog is and its impact.

The word “vlog” is a compound word of “video” and “blog”. Vlogs are a type of video content that involves filming one’s daily life to share online. Vloggers mainly use YouTube, where everyone can easily upload and watch videos.

Recording one’s daily life with these videos and communicating with friends has become a trend for Generation Z and Millennials, and interest in vlogging, a new content field, is increasing. According to the YouTube keyword tool, as of February 2019, the number of vlog searches increased about 16 times from 60,000 to 1.09 million in six months. This shows that the demand for vlog-type content has exploded within a short period of time. 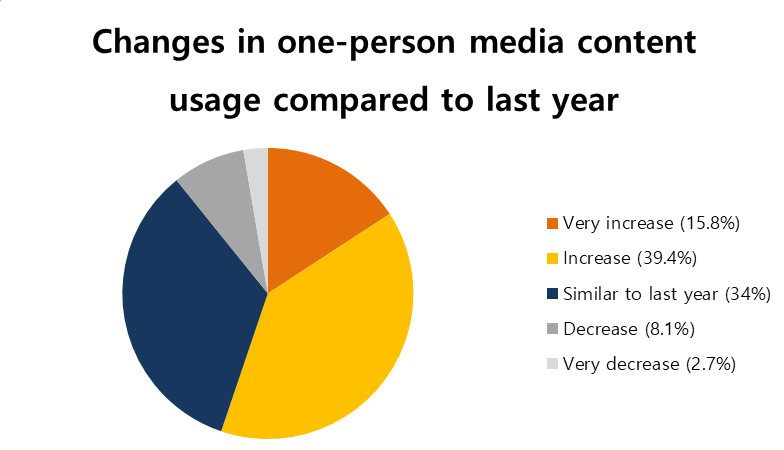 This chart shows changes in the use of single-person media content compared to last year, as surveyed by Mezzo Media in 2019. As you can see in this table, it shows an increase of about 55 percent over last year.

There are several reasons for the increased use of vlogs. First of all, simplifications in editing technology have lowered the psychological entry barrier for content production. Many general vloggers produce videos with smartphones rather than using professional shooting equipment, and viewers are well aware that they can also easily create their own content. Because of this, the people who post vlogs as a hobby are gaining as much popularity as professional YouTubers. In addition, the majority of their viewers are in the 2030 generation, referred to as the Z generation or the millennial generation. These generations, as distinguished from older generations, are accustomed to recording their daily life through video. As a generation exposed to the digital environment since childhood, these generations enjoy active communication with acquaintances through mobile video, and are more willing to share their lives with the viewing public.

Next, let’s look at the characteristics of vlogs.

Online video platforms are attracting users and allowing them to watch their favorite types of content anytime, anywhere, without constraints. In the past, traditional media were used, such as television, and content was consumed in a relatively passive position. Where two-way communication is possible, now it means that the viewer can also be a producer in the smart media era. No longer are we limited to the group of experts in the traditional media, but viewership can extend to individual creators as well.

In that communication that transcends time and space can provide a place for interaction with different interest groups, so more meaningful exchange is now possible. One-person media satisfies consumers’ desire for participation through intimate two-way communication between creators and viewers, and this reflects itself in videos, providing an emotional bond that was difficult to obtain in legacy media. Creators create the videos they want to make. Their viewers watch the desired content from the creator and can give feedback. Based on this received feedback, creators can make more videos that respond directly to their audience.

As the consumption of one-person media content has increased rapidly and the market expands, a new profit structure has been created. Creators can earn substantial profits from advertisements for content they create based on viewers’ support. In addition to these profits, it is possible to more easily challenge the traditional media content field. In fact, these days, personal media content may also be considered when applying for professional positions. They can serve as personal advertising for your range of talents.

When you come into contact with vlog content, it doesn’t feel very difficult or challenging. Content topics can include eating, childcare, beauty, and games, images of people’s ordinary daily lives, such as their commuting, talking with friends, and traveling. Turn your own memories into content, and if you can even make some money, what could be better than this? I really really recommend you try vlogging, a one-person media content.